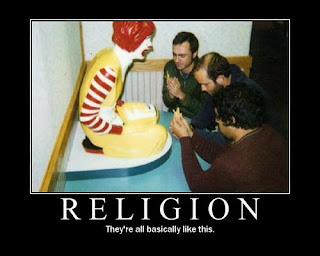 So I'm not a big fan of religion nor do I believe in it. I was born and raised a Catholic, going through the motions of receiving my sacraments because my parents told me so. As a child it's not like you have much of a say while your parents impose their beliefs on you. I remember attending religion classes and the hassle of going to church every week. As I got older, I started to believe less and less and somehow detached myself from God. Some reasons for doing so would be:


So my decision was final and if I 'had' to put a label, I suppose it would be Atheist (although, I choose to just be nothing). My parents didn't seem to care because they were not practicing Catholics.

A couple of days ago I was walking past a church. I don't really pay attention to churches, they mix in with the other buildings so it's not like I stop and say, "Oh, look, a church!" But for some reason there was a litter of cats sitting around the steps. Now, I am a huge animal lover so it broke my heart to see them. My reaction to these cats went something like this:

You would have thought I was preaching the word of the Lord with the way I executed those 3 "Holy Shit's." As I stood pointing at the cats, my cousin stood in complete shock, knowing that I'm screaming this in front of the church. I didn't understand why she wasn't reacting the same way, so I was looking at her like she was the crazy one. It was like I was some Satanic figure screaming at the top of my lungs, as if not a care in the world. I somehow managed to mix "Holy" which was appropriate with "Shit" which was inappropriate. But that was my reaction and I couldn't help but laugh at the irony afterword.

Sadly, these starving cats will stay outside the church doors with lack of food and shelter, and I couldn't help but imagine the good ol' priest driving home in his Mercedes with the money basket filled to the brim, possibly also screaming happily, HOLY SHIT!