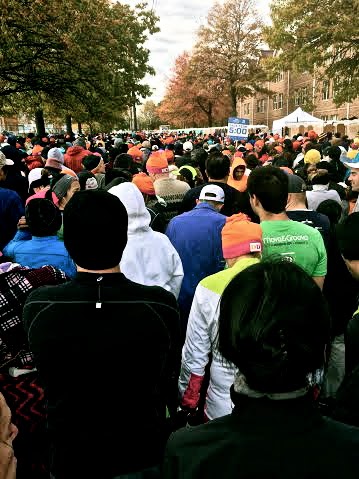 When you hear 26.2 miles you think 'oh that's a car ride away,' which, in fact, it is. But when you attempt to run it, as in a marathon, it turns into a complete mental test, a 6-hour destination. It's a chance to get to know a city we so easily avoid. 5 boroughs with 6 hours of intimate getting-to-know each other. Bridges we normally drive through become pedestrian pathways. People we normally ignore become our support system. We all become interconnected for the race of our lives. Humanity embraces what it means to be humanly human. And we embrace what it truly means to be alive.

This was speed dating at its finest. I was willing to get to know as many people as I could and possibly motivate them and change their lives. With only 6-hours I was going to conquer the NYC streets one high five at a time. I would stop at the top of bridges and breathe in the skyline of a city I had just been reacquainted with.

When I tell you I was completely terrified, that is just an understatement. I had failed in my running duties and not taking training too seriously. I thought, ‘hey if a woman can give birth and not prepare for that then I can definitely run a marathon.’ This, of course, coming from a girl who has yet to get pregnant. But we always tend to underestimate the powers of the human mind and body and I would be completely in touch with myself in this very moment in time to attain the unattainable for some.

I went into this with full intentions of blocking the world out. I didn't want to hear anything but the sound of my headphones. But then I heard the roaring of the crowd, which was better than any song I could play. The world was my stage and I was completely consumed. Every mile becomes a milestone as I develop into a newer better version of me. The city becomes a visual influence as I strive to be as tall as the buildings I stand next to.

I would be lying if I told you I did not think about giving up. More than halfway done yet 6.2 seems farther than 26.2. My knee begins to throb as I wonder how good it must feel to be standing still, sitting down, sleeping. I think back to the beginning of the race, a handicapped man with prosthetic legs being guided by two other men as he hunches over to catch his breath. Or the woman with a shirt that said 'Blind Runner' being led by the voice of the crowd all the way to the finish. And how about the man who juggled his way through and the woman who ran barefoot. Giving up was no longer an option but an obstacle.

His name was Nano. Born in New York but currently lives in Indonesia.

Hey! How are you doing?

Honestly, TERRIBLE! I just want to finish this race, eat my cinnamon raisin bagel, possibly have a beer or 10 and go to sleep!!!

His name was Barry. Born and raised in NYC.


It was the crowd on 1st Avenue right?

I had started the race with him but managed to lose him on the way. Darting down 1st from the excitement and energy of the crowd. He knew me well, but there he was next to me.

My two angels gave me wings, lifted me and without saying much dragged me to that finish line. Lamp post to lamp post, street light to street light, walk D to E, run F to the Finish.

I don't remember my feelings at that exact moment. I'm pretty sure I thought about stuffing my face. I couldn't even manage to walk to the people giving out the medals as I extended my arms for them to come to me, and with a simple gesture a volunteer runs over and gives me a hug,

I left Central Park with new relationships and intimate memories of the city. A journey not even a car could cover nor a bike or a plane. A pilgrimage where thousands headed towards sacred land. A reflection of life itself.