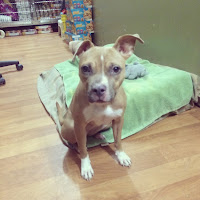 Working in an animal shelter really opens up your eyes to many things. I think I've seen it all: starving, abused, beaten down, broken, unloved animals. Families coming in willingly giving up their pets because they barked, or bit them, or pee'd on their 'expensive' rug-- stupid reasons that with time and patience can be easily fixed. Give them a chance! These are animals that have never had a home and if they did it was filled with abuse and abandonment. But people expect them to automatically become accustom to their lifestyle meanwhile they are still adjusting to their own after being saved from a harmful environment and learning that not all people or households are the same. 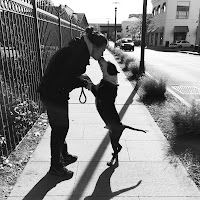 One thing that struck me being around these animals are how friendly, lovable and mushy Pit bulls are, or shall I use the correct term: The American Staffordshire Terrier. The term 'Pit bull' comes from 'Bully in the Pit' a phrase used for dog fighting. So, let it be known that these dogs were forced to kill one another while the peanut gallery cheers them on, injects them with steroids, and locks them back up in cages playing doctor so they don't get caught. And somehow they fall into being some sort of monster that people fear because of people themselves who throw them into these deadly situations and make money from their death.

People, the ones we assume have some form of morality, of logical thinking, of common sense.

People, the ones we assume know what's right from wrong, have superior intelligence, and are civilized.

These same people, or shall I say monsters find pleasure in the pain of these animals. These innocent animals.

And now they forever hold this negative connotation in the eyes of uneducated people. They're blinded because of the aggressive advertisement of these animals. Ignorance.

So who is the true 'bully' here? 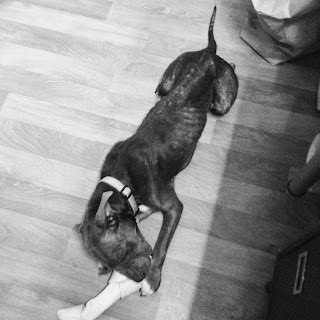 I will never forget the day my boss called me and told me that whatever I did that night to try not to cry. I couldn't wrap my head around what I was about to walk into. I knew we had just rescued a pit, but how bad could she be? I hesitated opening the door to the back room but I took a deep breath and walked in. There she was a beautiful blue nosed pit, nothing but skin and bones running right towards me, barely being able to keep herself up. This poor animal, the starvation, the abuse she must have went through. She ran right up to me and rubbed her head against my leg. As I placed my hand on her and rubbed her chest, she licked me. Deep down inside after all the pain she endured there was still hope for love. The reputation these dogs have causing people to fear them, but no one takes a step back to see the true monster that would do such a thing to an innocent animal. To have stripped it away from food, from love, from life. But here she is, trusting another human, trusting they aren't all the same as humans assume they are. And with open arms I embraced her allowing myself to give into my pain and cry.

Her name is Hope and that's exactly what she is-- Hopeful for a better tomorrow, for love, for a home.

And she finally got it.
Posted by Andrea
Email ThisBlogThis!Share to TwitterShare to FacebookShare to Pinterest